The rate at which people are fleeing war and persecution has soared from 6 per minute in 2005 to 24 per minute in 2015, according to a new report released today by the UN Refugee Agency.

The picture given by the UN agency appears dire and worsening. Wars and persecution have driven more people from their homes than at any time since UNHCR records began.

The detailed study, which tracks forced displacement worldwide based on data from governments, partner agencies and UNHCR’s own reporting, found a total 65.3 million people were displaced at the end of 2015, compared to 59.5 million just 12 months earlier.

It is the first time in the organization’s history that the threshold of 60 million has been crossed. 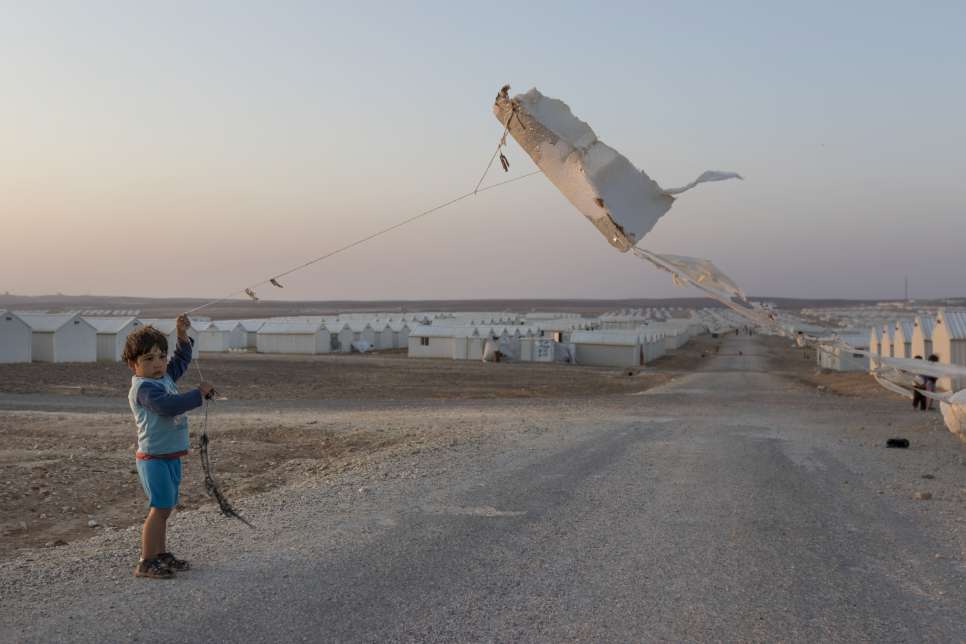 A Syrian boy flies a kite made from a piece of insulation material at Azraq refugee camp in Jordan. Photo: UNHCR/Christopher Herwig

“More people are being displaced by war and persecution and that’s worrying in itself, but the factors that endanger refugees are multiplying too,” said UN High Commissioner for Refugees Filippo Grandi.

“At sea, a frightening number of refugees and migrants are dying each year; on land, people fleeing war are finding their way blocked by closed borders. Closing borders does not solve the problem.”

The latest example of an unfolding crisis comes from Fallujah, Iraq, where 62,000 people have been displaced since the beginning of a four-week US-backed campaign to oust Daesh (aka ISIS) from the town, which lies about an hour’s drive west of Baghdad.

Half of the people displaced fled in just three days since ISIS fighters withdrew from their positions on the streets of Fallujah’s city centre, emboldening thousands of civilians to escape in their droves. The problem is that the humanitarian response has been slow.

“The conditions we are seeing in the camps are miserable, the scenes apocalyptic. We in the humanitarian sector, international donors, governments and Iraqi authorities have failed the Iraqi people time and again. We cannot abandon them now just when they need our help most. We need international donors to step up and provide the money needed to help these people. We need the Iraqi government to work with the UN to step in and actually manage these camps so aid can be provided efficiently. And we need food, water, medicines and other essential aid to get in urgently,” said NRC Country Director in Iraq Nasr Muflahi. 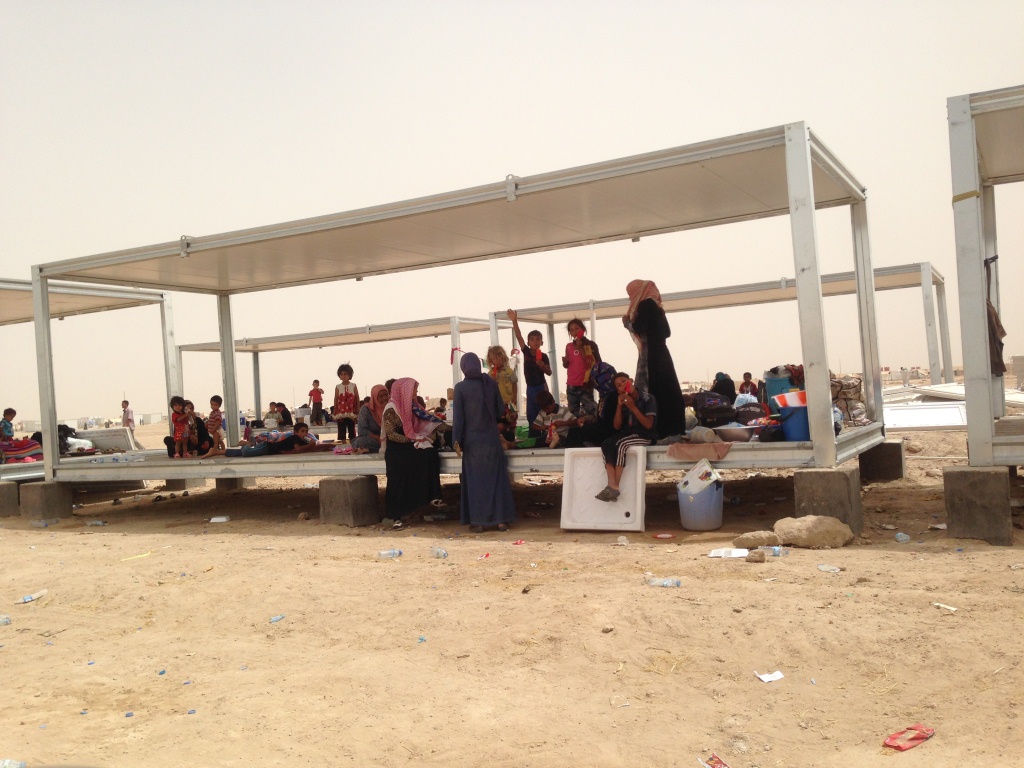 Families without tents at a camp for people fleeing fighting in Fallujah. Photo: Karl Schembri/NRC

Meanwhile, speaking of the global picture, UN High Commissioner for Refugees Filippo Grandi said politics was standing in the way of those seeking asylum in some countries.

“The willingness of nations to work together not just for refugees but for the collective human interest is what’s being tested today, and it’s this spirit of unity that badly needs to prevail,” he declared.

The UN report found that, measured against the world’s population of 7.4 billion people, one in every 113 people globally is now either an asylum-seeker, internally displaced or a refugee – putting them at a level of risk for which UNHCR knows no precedent.

To put it in perspective, the tally is greater than the population of the United Kingdom – or of Canada, Australia and New Zealand combined. It is made up of 3.2 million people in industrialized countries who, at the end of 2015, were awaiting decisions on asylum – the largest total UNHCR has ever recorded.

Also in the tally are a record 40.8 million people who had been forced to flee their homes but were within the confines of their own countries, another record for the UN Refugee Agency. And there are 21.3 million refugees. 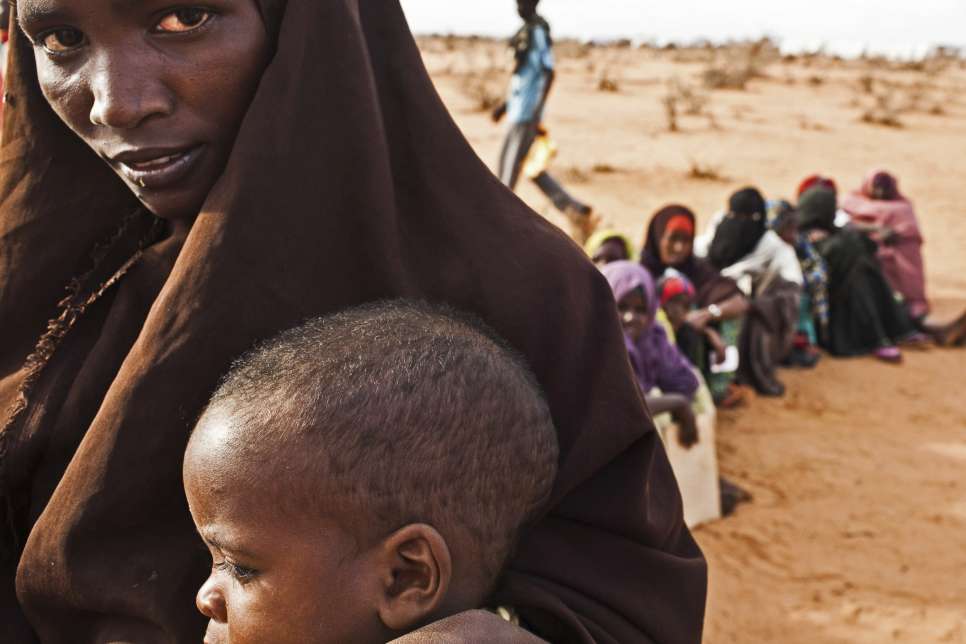 Forced displacement has been on the rise since at least the mid-1990s in most regions, but over the past five years the rate has increased.

The reasons are threefold: 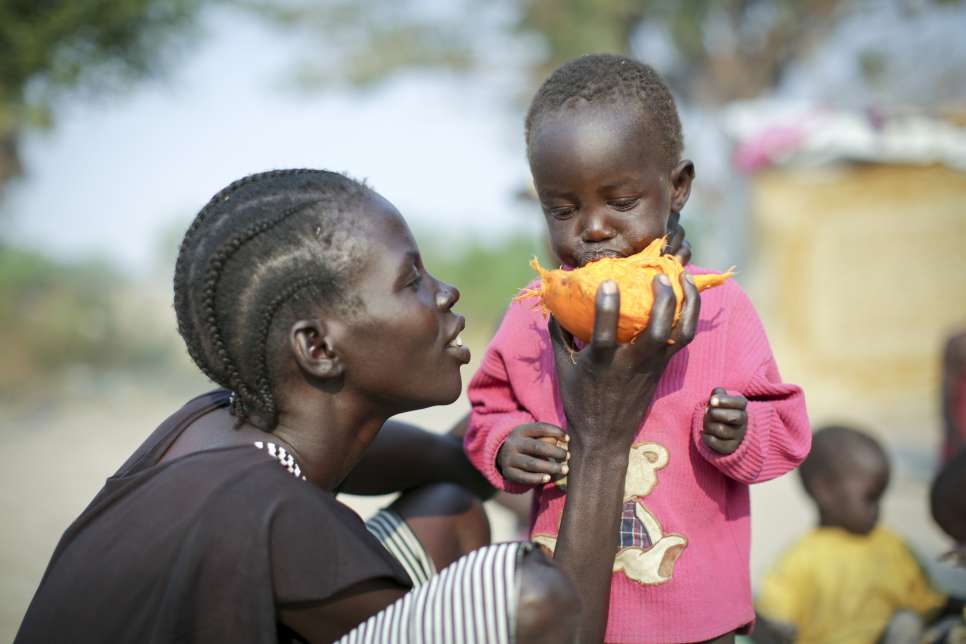 After seven days on the run, young Nyanchau, who is internally displaced, chews on the dry flesh of a palm nut in Rumbek, South Sudan. Photo: UNHCR/Rocco Nuri

The study found that three countries produce half the world’s refugees. Syria at 4.9 million, Afghanistan at 2.7 million and Somalia at 1.1 million together accounted for more than half the refugees under UNHCR’s mandate worldwide. Colombia at 6.9 million, Syria at 6.6 million and Iraq at 4.4 million had the largest numbers of internally displaced.

While the spotlight last year was on Europe’s challenge to manage more than 1 million refugees and migrants who arrived via the Mediterranean, the report shows that the vast majority of the world’s refugees were in developing countries in the global south.

In all, 86 per cent of the refugees under UNHCR’s mandate in 2015 were in low- and middle-income countries close to situations of conflict. Worldwide, Turkey was the biggest host country, with 2.5 million refugees. With nearly one refugee for every five citizens, Lebanon hosted more refugees compared to its population than any other country.

Distressingly, children made up an astonishing 51 per cent of the world’s refugees in 2015, according to the data UNHCR was able to gather (complete demographic data was not available to the report authors). Many were separated from their parents or travelling alone.