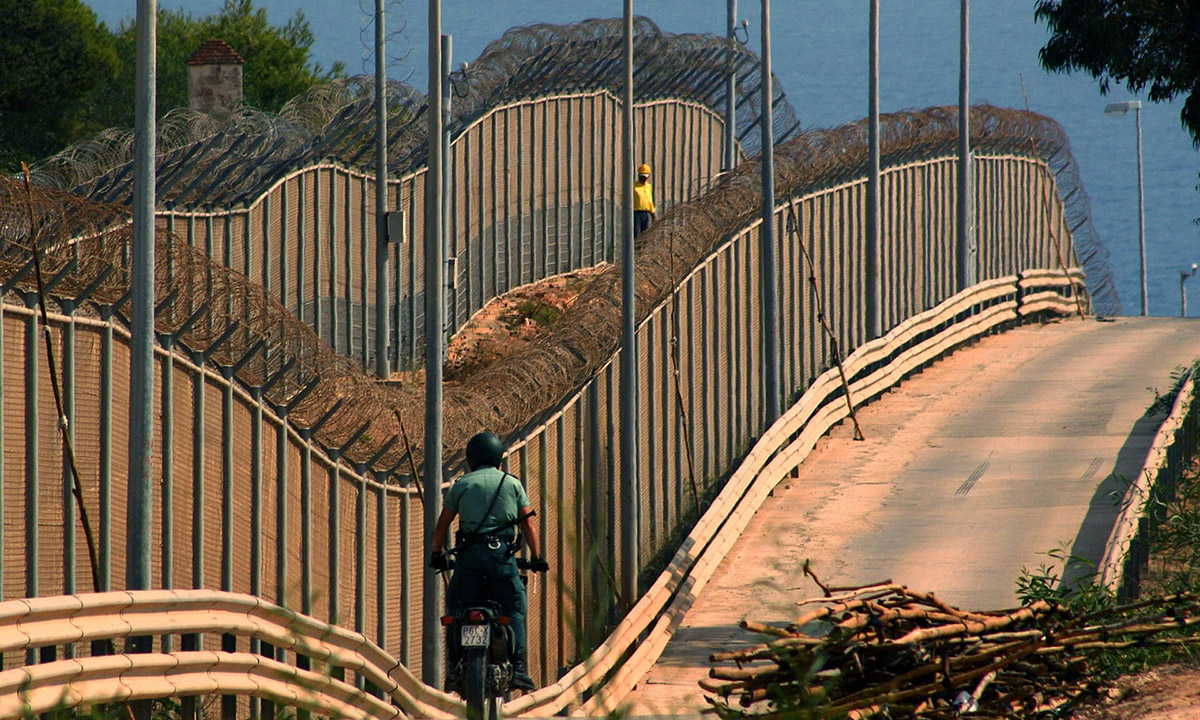 Within the last decade, the Mediterranean has become the deadliest migration route in the world, and migrants and forcibly displaced people are continually risking their lives undertaking dangerous journeys by sea to reach Europe. However, migrants are also attempting to reach European territory by crossing the European Union’s (EU) only land borders with Africa, at the small Spanish enclaves of Ceuta and Melilla. Since Spain’s entry into the EU, the enclaves, located on the northern coast of Morocco, have evolved into potential gateways to Europe for migrants coming from the African continent and beyond. Yet the enclaves’ unique geographical and geopolitical circumstances have also led to significant resources and controversial measures being utilised to prevent entry into them, despite their substantial reliance on interactions with their surrounding regions for economic sustainability.

Bordering Morocco on the Mediterranean coast of North Africa, the enclaves are highly contested territories, due to their colonial history and current geopolitical locations. They have been under Spanish rule since 1497 (Melilla) and 1668 (Ceuta), and their functions have varied from colonial trading posts to military garrisons. Since Morocco’s independence from France and Spain in 1956, the enclaves’ existence has continued to be an unsolved colonial issue. Morocco maintains that the enclaves are important territories that should still be decolonised, whilst Spain, backed by the UN, argues that the enclaves were Spanish territories centuries before Moroccan independence. This territorial dispute became a wider issue when Spain acceded to the European Economic Community (EEC) in 1986.

Prior to 1986, the enclaves were not part of most European matters, and Spain was not considered an obvious location for economic migration. However, Spain becoming a member state of the EEC in 1986 and then joining the Schengen Agreement in 1991, led to pressure for restrictive immigration policies and the intensification of border control, as the enclaves became focal points for undocumented migration to Europe, mainly from sub-Saharan Africa. This shift in border control began with the construction of militarized border fences at Ceuta’s 20km and Melilla’s 9km border perimeters in 1993 and 1998. The first fences were only basic, yet they have been consistently reinforced and upgraded with razor wire, motion detectors and infrared cameras, and on the Spanish side of the border for example, they are patrolled by both National Police and La Guardia Civil officers.

The fences have been a cause of much debate within Spain and beyond, as significant concern has been raised particularly over the installation of razor wire on the border fences, due to injuries caused and its ineffectiveness in deterring undocumented migration. The first razor wire fences were constructed along parts of the enclaves’ borders in 2005 but were taken down within two years due to serious injuries suffered by those who had climbed them. In 2013, they were reinstalled under Mariano Rajoy’s conservative government. Since then, the government under Pedro Sánchez vowed to “do everything possible” to remove the razor wire fences, and this pledge began to be realised in December 2019, when the razor wire along Ceuta’s border started to be removed.

Despite the dangers imposed by the fences and their militarized border personnel, migrants frequently try to cross the enclaves’ borders. In 2019, there were 4,984 irregular arrivals to Melilla, and 1,361 to Ceuta. Climbing or ‘storming’ the fences are the most common methods used by those attempting the crossings. This method is often undertaken within large groups, as for example, in August 2020, over 300 migrants tried to jump the fence into Melilla, with 50 successfully crossing into the enclave. The high numbers of attempts to scale the fences are argued to be due to significant obstacles migrants and asylum seekers face in accessing Spanish asylum points at the border, as a result of severe checks and delays on the Moroccan side. Efforts to climb the fences often result in injuries to migrants such as cuts and bone fractures. Smaller numbers try to enter the enclaves by swimming around where the fences meet the sea, whilst others take small boats. Attempts to swim around the fences have also resulted in injuries, and in some cases deaths to migrants, including an incident in 2014, when 14 migrants drowned trying to reach Ceuta after Guardia Civil officers fired rubber bullets at them. 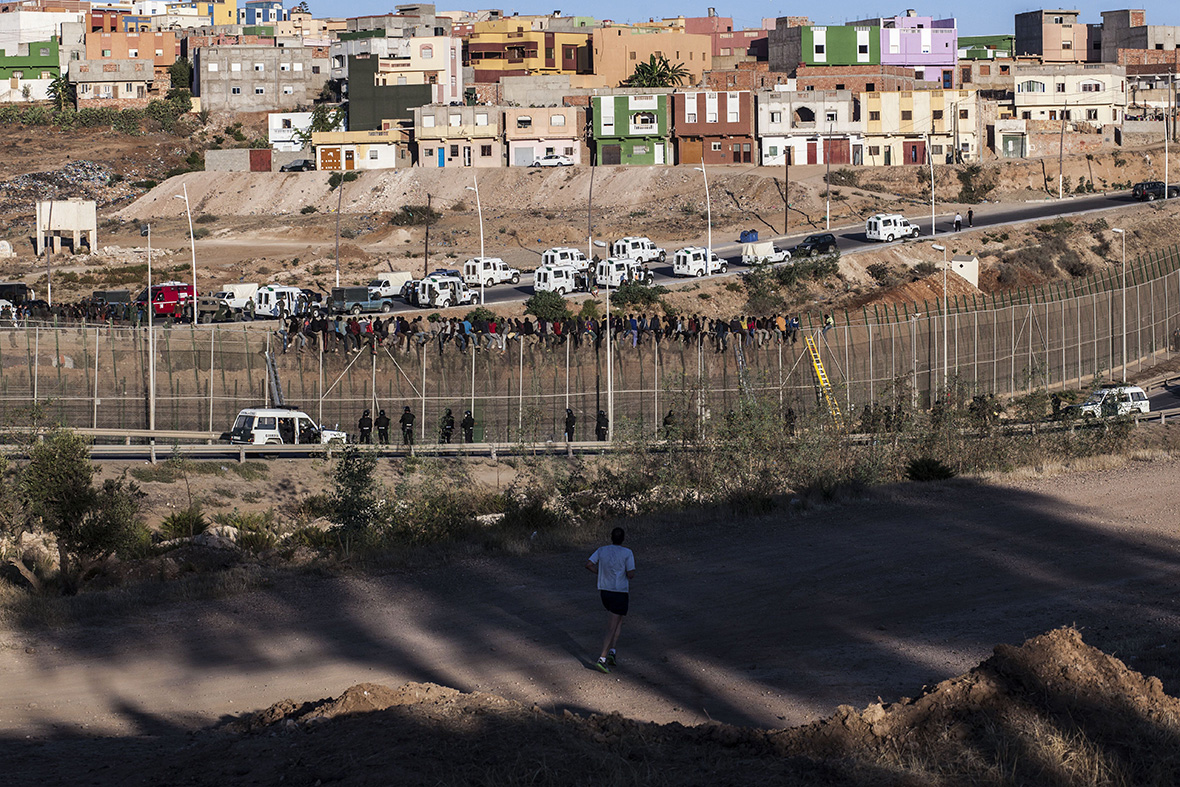 Although the migrants that manage to cross the borders into the enclaves are technically considered to be in Spain and the EU, and able to apply for international protection under the Spanish asylum system, by entering the enclaves, they are only reaching Europe territorially. The enclaves are examples of Schengen flexibility, which means that despite media-fuelled fear over migrants scaling the fences, migrants are not entitled to unobstructed travel through the Schengen area following entry into the enclaves. If migrants enter Ceuta and Melilla irregularly, they are transported to CETIs (Temporary Reception Centres), where they are required to reside as their legal circumstances are settled. This process can be very slow, and migrants often remain in the heavily overcrowded CETIs for up to a year before decisions such as determining transfer to mainland Spain or deportation are made.

However, there have been several cases of Spanish authorities at the enclaves returning migrants to Morocco instantly without undertaking sufficient identification procedures, through Spain’s controversial pushback policy. Such occurrences include an incident in 2014, when two migrants were immediately returned to Morocco after they had crossed the border into Melilla irregularly. The case, widely criticised by human rights organisations, was taken to the European Court of Human Rights (ECHR). However, in February 2020, nearly 6 years after the incident, the ECHR ruled that Spain was not in violation of European law when the migrants were returned, prompting further condemnation from rights groups.

Ceuta and Melilla’s borders are highly complex boundaries, and their unique geopolitical locations have led to them becoming routes for migrants attempting to enter Europe. As a result of their distinctive circumstances, considerable resources have been dedicated to controlling entry into the enclaves. Yet despite the use of such resources and other border restrictions, migrants have continued to try to enter the enclaves in recent years by scaling the border fences, as well as through other extreme methods. However, the last year has represented a turning point for the enclaves, as it is becoming much more difficult for migrants to cross the borders. This rising difficulty has been attributed to Moroccan border forces increasing arrests and clamping down on migration across its borders to particularly Ceuta. This escalation of border enforcement has reportedly led to a decline in crossings recorded in 2019 and at the beginning of 2020, and is therefore, creating further dangers and difficulties for migrants trying to find a better life in Europe.

If you’re interested in Xchange’s work, please follow us on social media or sign up to our newsletter for up to date information on our activities and plans.

If you would like to support our research, please donate now.