Migrant Voices of the Mediterranean: “Your wife is not here!”

“Your wife is not here!”

John is a Nigerian man who travelled to Libya with his wife. He began his journey in late 2016.

He spent six months in Sabratha, a coastal city in Libya and one of the major embarkation points for boats carrying migrants to the Mediterranean. He lived in a camp with his wife on the outskirts of the city. It was quiet there, with only a few residential houses around. During this time, he struggled to raise enough money to leave and find somewhere more comfortable to live.

Honestly, the smell alone [was enough]; no home, no roof…sometimes it rains, it rains on you; the sun comes, dries you up; hunger is unbearable; starvation is something else; no water to take your bath –sometimes I go to work and I come back and I try to get some water to bathe with. It is not a place to be…

John would go out every day to look for a way to earn money to escape. Sometimes he would work but employers would refuse to pay him, chasing him with guns if he dared to argue with them. John explained that money is not the only thing that will get a migrant further; they need to be both mentally and physically strong, ready for what will come.

They [the smugglers] don’t tell you where you are going. They put you in the car. You go. If you are not strong, you can’t even get yourself into the car.

The smugglers came a couple of days before the he boarded the boat to Europe. He was happy to leave Libya with his wife after all that he had been through. But when he boarded with the large crowd of people, he realised his wife was missing:

I did not know my wife was not in the vehicle. When we entered, they were dragging us. I put my wife in first before I came in. I didn’t know someone pushed her out from the other side. They pushed her out and I didn’t know that she was out. When I entered, I thought she was still in. It was dark when I got into the boat. Someone told me, ‘Your wife isn’t here’. I said, ‘she is below’, but they [insisted] she was not on this boat. I was very depressed. When I get there I will call her, find her. I wonder how she will cope without me, she is about 5 months pregnant.” 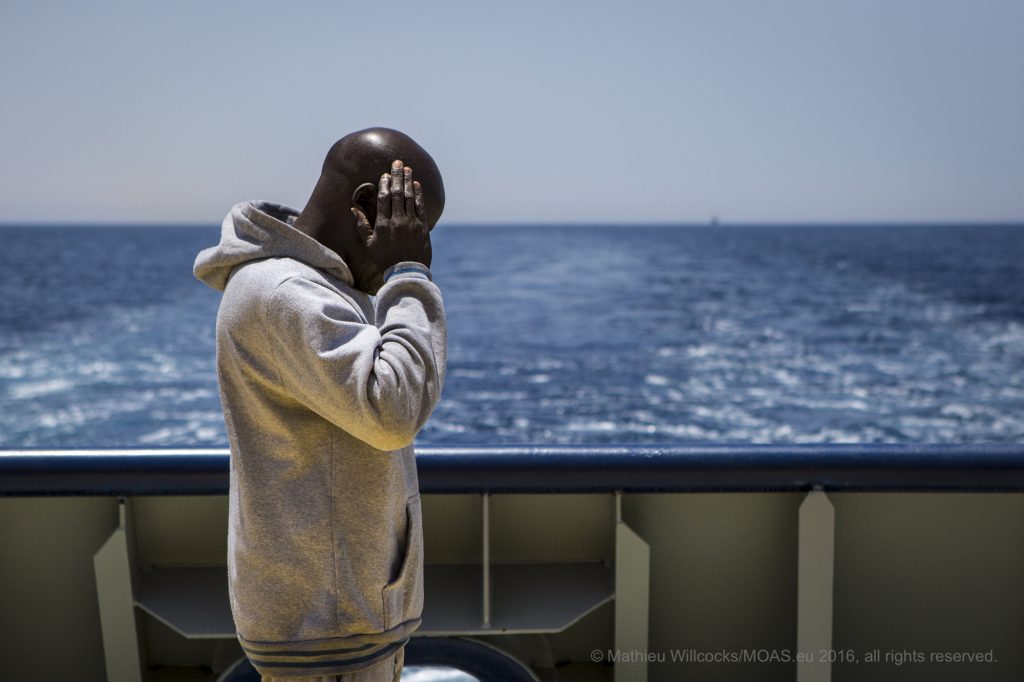